From Pink Collars to Pink Hats: Working-Class Feminism and the Resistance 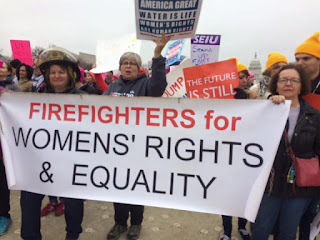 Photo from Women Firefighters Contingent to the Women's March on Washington

Tightly gripping a “Firefighters for Women’s Rights and Equality” banner at the Women’s March on Washington, a group of women who had once made history as New York City's first female firefighters roared up Independence Avenue. There, they joined a new generation of labor activists: teachers, nurses, government workers, restaurant servers, home health-care aides, communications workers, and thousands of other working-class women and men who turned out to protest Donald Trump’s inauguration in what was perhaps the largest global political mobilization in history. Women have continued to march, huddle, strike, and organize against Trump since January, among them legions of young women workers. Is it possible that women—including working-class women—can generate a powerful-enough grassroots movement to overcome Trump?

It’s not immediately obvious that a new women’s movement will spell the Donald’s downfall. The corporatized feminism featured in the popular media seems a particularly poor basis for opposition. If Dove soap, Facebook executive Sheryl Sandberg, and Ivanka Trump are our modern-day feminist icons, there is little hope that the women’s movement can be a cross-class organizing tool. Even many progressives doubt the power of women’s issues to transform the political moment; some branded the call for women to strike on March 8 as elitist, for example.


Feminism too often gets a rarified label; it’s considered the property of elite women with their eyes on glass ceilings. Yet working-class feminists have long been potent champions for women’s advancement, and 1970s second-wave feminism had deep cross-class roots. The late-night huddle in Betty Friedan’s hotel room that first sparked the National Organization of Women (NOW) included a number of union activists, among them Caroline Davis and Dorothy Haener of the United Auto Workers and Catherine Conroy of the Communications Workers of America. NOW’s founders were fed up with the new Equal Employment Opportunity Commission’s refusal to target gender job discrimination while enforcing Title VII of the 1964 Civil Rights Act. Working women activists formed more than a dozen organizations to improve “pink collar” office work in the 1970s. Women Employed in Chicago and 9to5 in Boston upended cultural expectations that secretaries should pamper and fetch coffee for their male bosses. Women like those roaring NYC firefighters fought their way into all-male blue-collar enclaves in the 1970s and 1980s, filing lawsuits and demanding respect.


Today, women once again lead a wave of labor and class-based organizations, and together these groups make up a new iteration of working-class feminism. Women are at the forefront of “alt-labor” groups like the Restaurant Opportunity Centers, the National Domestic Workers Alliance, and the National Taxi Workers’ Alliance, and all brought troops to the Women’s March on Washington. Women are key activists in traditional unions, too. Three of nation’s largest unions—the American Federation of Teachers, the National Education Association, and the Service Employees International Union—have female presidents, and women will make up a majority of U.S. union members by the year 2023. Women are far more likely than men to hold the sorts of part-time and contingent McJobs that are becoming the economy’s norm, and they are fighting back from the helm of the Fight for 15 campaign. The Black Lives Matter movement’s analysis includes a savvy mix of class and race; its three founders are all women. In fact, Black Lives Matter activists will demonstrate alongside workers leading Fight for 15 on April 4, the anniversary of Martin Luther King Jr.’s death. Young women also power much of the immigrant workers’ rights movement, yet no one thought to label the recent Day Without Immigrants strike as elitist.

A big difference between the working-class feminism of the 1970s and that of the 2010s has to do with the economy. When those firefighters and pink-collar secretaries fought for inclusion 40 years ago, they demanded access to an economy marked by broad prosperity. Working people’s share of the pie had been steadily growing for decades, and they saw no reason why that wouldn’t continue. Since that time, working people’s prospects have dimmed and their wages have stagnated; the United States has largely traded manufacturing jobs for low-paid, contingent service jobs.

After all, many working-class women voted for Trump. While the majority of females voted for Clinton, a full 61 percent of white women without a college degree walked into a voting booth and filled in a bubble beside the name of a man who bragged about grabbing women’s genitals without consent. The breadth of white working-class women’s support for Trump was one of the many 2016 election shocks that a flawed polling system failed to predict. While analysts will long debate these voters’ thinking, it’s clear that many of these women share the sense of dislocation and despair that drove white, blue-collar men’s votes. Common-sense economic solutions for working women will be key to turning around those votes for progressive candidates in 2020 and beyond.

That’s why the robust working-class feminism bubbling up among women, particularly young women workers and women of color, holds the power to reshape the nation’s economic and political landscape. Young women are leading the most exciting and dynamic aspects of the 21st-century progressive movement, and they’ve been at this for a while now—well before the sea of pink pussy hats riveted the world’s attention. Progressives who seek to oust Trump should nurture and support today’s intersectional working-class feminism; far from elitist, it speaks for so many Americans that it may provide the key to long-lasting change.

You can find the piece at the American Prospect here
Posted by Unknown at 6:44 AM No comments: